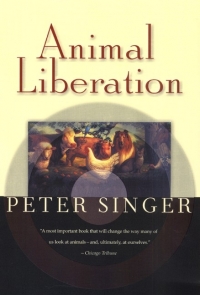 Peter Singer’s Animal Liberation: An Introduction to the Book that Made Animal Ethics Important. Part I

The animal liberation movement has come a long way since the publication of Peter Singer’s thoughts (in Animal Liberation – AL) on the moral conduct (or lack thereof) of humans towards nonhuman animals. The importance of Singer’s influence on animal ethics is irrefutable, as animal rights theorist Tom Regan appropriately remarked in his 2001 work, Defending Animal Rights, “philosophers have written more about animal rights in the past twenty years than their predecessors wrote in the previous two thousand”. This lack of academic and journalistic coverage of the issue is the primary reason Singer wrote the book. As he stated in a 2005 contribution to the New York Review of Books entitled Animal Liberation at 30 (he had corresponded with the Review in the early 1970s):

“… In the early 1970’s, to an extent barely credible today, scarcely anyone thought that the treatment of individual animals raised an ethical issue worth taking seriously. There were no animal rights or animal liberation organizations. … That’s why I wrote to the editors of the New York Review …”

Singer’s correspondence with the New York Review resulted in the publication of AL in 1975. Since then, the animal welfare organizations Singer later mentioned as being nonexistent began to spring up around the nation, and expanded exponentially in number around the world. Henry Spira, widely considered to be one of the most effective animal rights advocates to date, as well as the organizer of the first successful campaign against animal testing in America, credits Singer as the source of his inspiration. So what is it that Singer expressed in AL that inspired the work of philosophers and activists alike?

Like most modern philosophical works, Singer’s AL contains a combination of original argumentation, historical analysis, and a deep look at the prevailing beliefs of its time. Keeping in mind that the horrors of factory farming, animal based testing, and other modes of nonhuman subjugation were widely hidden from the general public in the early 1970s, the book (containing comprehensive reports of the treatment of animals) came to be regarded as a shocking wakeup call to readers who were, unbeknownst to themselves, immersed in a deep culture of subjugation, suffering, and slaughter. In order for the content of his discussion to be received as morally relevant, Singer had to first take on the difficult task of addressing the arguments for the use of nonhuman animals by humans, arguments that were (and to a lesser degree are still) ingrained in the psyche of the general public. Singer’s argument for the liberation of nonhuman animals, remains, some forty years after its original publication, the most cited, taught, and celebrated argument in the history of animal ethics.

Efforts have been made by many, on both sides of the animal rights debate, to discredit Singer’s work. Those opposing the moral consideration of animals for which Singer advocates fail to properly deconstruct Singer’s rationale, while those rebuttals offered by animal rights supporters tend to use Singer’s established principles to paint his theories as incomplete, or insufficient. In many ways, these counter arguments misquote, and/or misunderstand the arguments put forth by Singer in AL. Despite the many attempts made over the last forty years, scholars generally agree that no one has successfully offered a counter argument to Singer’s ethical stance on the use of animals by humankind.

In the next issue of this publication I will discuss the argument that gave Singer the title “father of the modern animal rights movement”, while also addressing many of the criticisms found on both sides of the animal rights debate. Regardless of one’s evaluation of Singer’s views, it goes without saying that Singer’s work in animal ethics initiated progress in the field at the levels of academic theory, advocacy, and political and social reform. Without the publication of Animal Liberation, who knows how much longer people would have stayed in the darkness of moral degradation, standing idly by as animal lives all over planet earth wait for their voices to heard?

Joshua Sias ia a passionate animal rights advocate, and a promsing student.  We appreciate his submission, and look forward to part II.