by Badges for Bullies 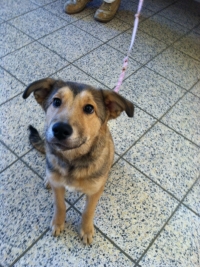 Abandoned, alone, injured, sick, and scared. For so many homeless dogs in Cleveland, this story is all too familiar, and it usually doesn’t end well. For three very lucky dogs who are now in the care of Badges for Bullies, the future looks bright.

Phoenix was found abandoned, covered in bite wounds, and extremely emaciated. Many of his wounds were open or recently scabbed; he was so thin you could nearly see every bone in his frail body. This didn’t stop him from greeting his rescuer, Detective Sean Smith of the Cleveland Police Department with a friendly wag of his tail. Detective Smith, a board member of Badges for Bullies, reached out to his group for help when he saw Phoenix at Cleveland Animal Control. Due to his physical condition, the typical rescue route for abandoned dogs at Cleveland Animal Control wasn’t an option. He was to be euthanized the next day. Phoenix needed immediate medical treatment, and a safe place to heal. Badges for Bullies quickly got Phoenix to the Macedonia Veterinary Clinic for treatment, where he has been extremely well-cared for since December. Phoenix’s wounds are healed, he is a healthy weight, fully vetted and can’t wait to find a foster or forever home!

Honey was roaming an east side neighborhood when she caught the attention of Cleveland Police officer and Badges for Bullies board member, Tim Guerra. Honey was terrified and so very hungry; she was nothing more than a tiny ball of fur-covered bones. With the help of Detective Sean Smith, Honey was brought to safety and taken to West Park Animal Hospital, where she began her recovery. Honey was aged to be approximately six months old. She was extremely fearful of everyone and was so weak, that she had trouble standing and walking. With patience, affection, and a few good meals, Honey started to come around. Now a bundle of love, Honey is spending the rest of her recovery with her foster family, who is very interested in adopting her.

Nemo's story started the same way as many homeless dogs in Cleveland who find their way to Cleveland Animal Control. Due to his happy, wiggly temperament, and awesome temperament test scores, Nemo earned a spot on the “Urgent” list, where a volunteer group finds foster homes and rescues for dogs who have nowhere else to go. Nemo’s second chance came when he was accepted by a rescue shelter in Pennsylvania. Only days before he was scheduled for transport, a volunteer noticed he was very ill. Friends of the Cleveland Kennel stepped in, as they very often do when dogs at the kennel are sick or hurt, and arranged for Nemo to see a vet. Nemo went to Gateway Animal Clinic, so sick and weak, he couldn't walk. We learned that Nemo was likely suffering from severe pneumonia and his condition was critical. Without further medical care, he would most likely die. Due to being contagious, Gateway was not able to hospitalize him at their facility. Volunteers contacted Julie Konopinski, one of the driving forces behind the rescue effort at Cleveland Animal Control and also a board member of Badges for Bullies. Quickly, Badges for Bullies arranged for Nemo to be transported to West Park Animal Hospital, where he could receive treatment in an isolation kennel. He received antibiotics, oxygen, and fluids. After several days in critical condition, Nemo fought his way to recovery. He is currently in a wonderful foster home, where he is quickly gaining weight and learning what life is like in a loving home. He lives with another dog and a cat, both of whom he gets along with well. Nemo will be fully vetted and available for adoption in the coming weeks.
The adoption process for Badges for Bullies includes an approved application, reference and home check, and adoption fee. For more information on providing a foster or forever home for any of the Badges for Bullies’ dogs please contact Badgesforbullies@hotmail.com.

To help Badges for Bullies continue their mission, they are holding two upcoming fundraisers. First, there will be a Spaghetti Dinner and Bake Sale on April 19th from 6:00 – 11:00 pm at the Cleveland Police FOP Lodge #8 located at 2249 Payne Ave, Cleveland OH. Cost is $10 presale and $12 at the door (Children 10 and under $5). All on-duty public safety personnel eat for $5. Included with each meal is pasta with sauce, salad and bread. Drinks, including soda and beer, will be available for a small charge. The event is sponsored by Chef Jonathon Sawyer and the Greenhouse Tavern, who graciously donated all the pasta, Cleveland Police Patrolman’s Association, and the Fraternal Order of Police Lodge #8. Presale tickets can be purchased through PayPal at Badges for Bullies e-mail address at Badgesforbullies@hotmail.com. Please note your purchase is for Pasta Dinner tickets and the number of tickets you are requesting. Badges for Bullies will also be hosting a screening of “Guilty ‘Til Proven Innocent” at the Capital Theater located at 1390 W. 65th Street, Cleveland, OH 44102. “Guilty “Til Proven Innocent” is a documentary that examines Breed Specific Legislation in Ohio, and the effect it has on local communities. The screening will take place on Sunday April 28th, at 2:30pm. Tickets are $10 plus a $1 ticketing fee. It is recommended that tickets be purchased in advance at the Cleveland Cinemas website at the following link: http://www.clevelandcinemas.com/moviedetails.asp?id=4496 Information on all of Badges for Bullies activities and events including updates on Phoenix, Honey and Nemo can be found on their Facebook page!

Badges for Bullies is a group of dedicated Cleveland Police officers who work, off duty, to save the lives of suffering dogs and cats in our area.  We proudly support their efforts, and hope you will consider attending their upcoming fundraiser.