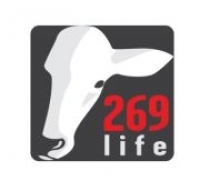 It has been two months since I was bound with chains, dragged across jagged rocks in the freezing rain, shorn of my mid-back-length hair, and branded with a cattle iron heated to over 500°F. I am now bald, scarred and permanently marked.

But I’m alive. Others are not so lucky.

In my case, the caging, binding, shaving, and branding were voluntary and consensual aspects of a demonstration with which I hope to bring attention to the suffering and death of those who do not give consent and have no voice.

In this country alone, 8.3 billion animals were killed for food in 2012, according to the USDA’s National Agriculture’s Statistics Service. This estimate is a gross underestimation, given this data does not include fish, marine animals, crustaceans, rabbits, other farmed animals, or animals killed for their fur or other “by-products.”

Here we may morally draw a distinction: they are animals, we are humans. We may place our welfare above theirs. Perceive their suffering to be comparatively lacking in depth. We create barriers, categories and divisions: them and us.

We humans have long drawn arbitrary lines between races, classes, genders, and other perceived boundaries within our own species. But is our self-imposed separation from animals any less arbitrary? Theodor Adorno, German Jewish philosopher, sociologist, and musicologist warns us that “Auschwitz begins whenever someone looks at a slaughterhouse and thinks: they are only animals.”

It is with this caution in mind that, on January 27th, 2013, the day designated by the United Nations as the International Day of Commemoration in Memory of the Victims of the Holocaust, I orchestrated my own branding in front of a rusted steel shed by a desolate railroad track in Iowa City, IA.

The exact number I was branded with, 269, is the industry-give number of a calf born in a factory farm in Israel. On October 2, 2012, three vegan activists in Israel were branded with the number 269 in a public square in Tel Aviv. They took on his number to give a face to the faceless and a voice to the voiceless. Three months later, on the other side of the world, in the middle of America, I used the very same branding iron on my flesh.

Living in Iowa, I’m painfully aware that I’m in the center of American factory farming and industrial agriculture. The “assembly line” slaughter practiced worldwide was born in the American Midwest within the beef plants of Chicago.

Exposed for its horrific lack of sanitation and abusive practices by Sinclair’s “The Jungle,” the meat packing industry temporarily became a safer, cleaner industry. However, today, the “don’t break the chain” mentality captured in Eric Schlosser’s “Fast Food Nation” is back in full swing, having been resurrected and “perfected” in Denison, IA, by Iowa Beef Packers (IBP), now Tyson Foods. As with every industry, the faster the chain moves, the more product produced, the higher the profit. Only in this case, the “product” is a living being who is “produced” by being slaughtered.

In the months leading up to my branding event, I experienced a great deal of resistance and hit may roadblocks. Once the press questioned the University of Iowa, where I’d originally planned to hold the event, about the branding, my permission for the site was withdrawn. I had multiple individuals back out of participating in the event due to legal and medical concerns.
Since the event, I’ve received a range of feedback, including outrage and disgust. My reaction is the same now as it was to those who declined to participate out of concern for legality and medical safety: If we are so outraged, concerned, and offended by this voluntary act of mine, how can we be complicit participants in the enslavement, torture and murder of other sentient beings? What I went through was nothing by comparison.

Others fear as I fear, bleed as I bleed, and suffer as I suffer; the crucial difference between them and me is they had no choice. While I experienced momentary discomfort, they were systematically abused. While I was performing for a cause, they were anything but pretending. While I am home nursing my wounds, they are bleeding out and dying a conscious, fear-filled death.
If we find comfort in distancing ourselves from their plight with our arbitrary divisions, we best remember what Holocaust scholar Dr. Charles Patterson wrote in his book “Eternal Treblinka: Our Treatment of Animals and the Holocaust”:

“Throughout the history of our ascent to dominance as the master species, our victimization of animals has served as the model and foundation for our victimization of each other. It is significant that the Nazis treated their victims like animals before they murdered them. The study of human history reveals a pattern: first, humans exploit and slaughter animals; then, they treat other people like animals and do the same to them.”

A child of Holocaust survivors, Anne Muller empathizes with those exploited, stating,

“when you grow up learning about how your family was killed by a government and by people who thought they were worthless, or worse, and who had absolute power over them and exercised it with brutal force, taking everything, even their lives, you can’t help but feel deeply for those who are in that predicament. Animals are weak, they have no voice, they can’t help each other or themselves. We were like that too.”

Link to the video: http://youtu.be/I8i0oPHkyU0

I had my 269 tattoo done here in NE Ohio during one of two recent worldwide 269 tattoo events, and explaining it has opened the door to many enlightening conversations with the previously unaware.  I am proud of having it, and very appreciative of becoming informed on the 269 For Life Community which I fully support. Editor, Gia Campola