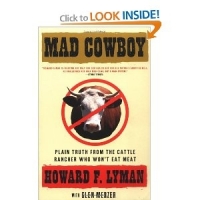 I was raised on a small farm in Montana in the 1940s, during World War ll. We were poor but I had no understanding of what that meant. We had enough to eat and a large loving family, so the world looked great to me.

Living on a farm I was surrounded by many animals. My dog was always at my side, and I'm sure he spoke our language. The cows and horses all had names, and each one was a special critter.

I learned that a cow could pick her calf out of hundreds of other calves, and she never made a mistake. Our workhorses responded to verbal commands, so there was no doubt they understood our words, but we had trouble with theirs.

It was also a time when you never questioned the need for animal products in your diet. Milk was nature's most perfect food, and this was agreed to by all, without thought or comment.

After high school I decided to attend Montana State University to learn the new modern methods of farming. I became exposed to better living through the use of chemicals. I never met a chemical I didn't like. Armed with a degree in agriculture, I went home to build a large agribusiness.

I look back today with regret at how I became part of the profit-driven industry instead of an understanding animal among other animals. It took me years to understand that we are just a part of the universe, and not the most important part of it.

My life experience has given me a better understanding of what is happening, and what a mistake it is to believe there is anything called "humane" slaughter. Animals have families and feelings, and to think that kindness before killing them is an answer is totally wrong. Humans have no need for animal products. And when we consume animal products, we're not just killing the animals. In the long run, we're killing the planet, and ourselves.

I'm sure that it will take many years before the majority of humans learn as I have that actions, and not words, are the true proof of our understanding of the term humane. Living my life as I do now, as a total vegan, gives me great joy in knowing that no animal has to die for me to live.

A former Montana cattle rancher, Howard Lyman is a world-renowned public speaker, author, and animal advocate. He is also the founder of Voice for a Viable Future and the subject of two documentary films, Mad Cowboy and Peaceable Kingdom: The Journey Home.

Be sure and read Howard's book:  Mad Cowboy: Plain Truth from the Cattle Rancher Who Won't Eat Meat.