You could lose it all 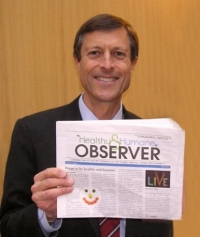 Dr. Neal Barnard was recently in Cleveland speaking to a full auditorium at John Carroll University.  Dr. Barnard garnered the crowd's attention immediately by asking what was most important to us in our lives.  Answers were called out such as family, health and happiness.  He then sobered the group by asking, "What if I told you that you could lose it all?"  Dr. Barnard spoke on the threat of Alzheimer's disease, dementia, and progressive memory loss that we all are susceptible to.  It is no longer believed that we are necessarily predisposed to these ailments through genetics and, that if we are, we can avoid them. It is also now known that heredity may not even be a factor, for some, in the acquisition of ailments such as Alzheimer's disease.  These problems are no longer a sentence or inevitable.  How can they be avoided?  The answer, one which we are hearing over and over again, is very basic and simple -  change our diets.

When Dr. Neal Barnard’s father started to develop dementia, everything that was important to him was taken away piece by piece.  “Nothing else matters if you can’t remember names or things you did together,” said Barnard. Both of Barnard’s parents developed dementia before they passed away.

Barnard, who founded the Physicians Committee for Responsible Medicine, researched and wrote about Alzheimer’s in his newest book because “it’s an impending disaster,” he says.  More than 5 million Americans are living with Alzheimer’s in the U.S., according to the Alzheimer’s Association.  Although Alzheimer’s is the focus of Barnard’s book, Power Foods for the Brain, he says the book is actually about memory and brain function at any age.

Research indicates a direct correlation between food and the brain that was previously not known.  The turning point occurred in Chicago in 1993 when a study was started – the Chicago Health and Aging Project – and they began tracking what people ate. Ten years ago, it became very clear that the people who ate the most saturated fat – not only did they have more heart problems – but they had more brain problems, specifically Alzheimer’s.  The people who ate the most saturated fats had easily three times the risk of Alzheimer’s compared to other people. From there, they looked at trans fats like those in doughnuts and snack foods. Same story. The bad fats of either type would dramatically increase the risk of Alzheimer’s.  By simply avoiding these fats one can cut the risk of this disease in half or even more.  What we eat can protect our brain.

Dr. Barnard absolutely encourages a vegan diet. "When I was growing up in Fargo, I never met a vegetarian, let alone a vegan. It seemed like a real tall order. But something has changed in the past six or eight years. It’s become very common."

A generation ago, Americans were grappling with the issue of tobacco, and many people said it’s too hard to quit. This generation, the current generation, is dealing with food.

There are many foods that protect the brain and promote healthy brain function.  Among these are sweet potatoes. Sweet potatoes are high in beta carotene which is an antioxidant that will protect you.  Certain fruits and vegetables have special protective effects that help the brain function properly.  Exercise and restful sleep are also necessary for proper brain function and help alleviate brain shrinkage.  The risk of Alzheimer's or even mild cognitive impairment can be dramatically reduced and even eliminated if we avoid bad fats and boost our intake of vegetables and fruits, particularly the ones that are rich in B vitamins like beans, bananas and green leafy vegetables.

Dr. Barnard discussed the "blue zones" of the world - areas in which communities of people tend to live longer, healthier lives and maintain maximum brain function along with their longevity.  One is here in the United States - Loma Linda, California.  The commonality of the people in these areas is that they mainly eat a whole food, plant based diet.  They are physically active, eat well and get proper sleep.  Therefore, they tend to feel better, interact better and, for the most part, are happier.  They also tend to support one another on the path to a long, happy life.

Dr. Barnard closed his talk with two powerful points.  One is that by changing this generation's way of eating - therefore our way of living and aging - we will be helping our children and all future generations live longer, happier lives.  He closed his lecture with a very sensible and logical statement.  Dr. Barnard said that we need to choose dietary change as our first alternative to physical and mental impairments. If all of our dietary changes are exhausted with no beneficial results then , and ONLY then, should we choose drugs as a cure.  Currently, we have this in a reverse.  Rather than following Neal Barnard's simple plan, we tend to pop a pill to fix what is wrong.  Try Dr. Barnard's and the Physicians Committee for Responsible Medicine's 21 Day Kickstart Program and, by all means, read Neal Barnard's latest book, Power Foods for the Brain.  This is no quantum leap, and three weeks is not that long of a period to try and improve your current health - both mentally and physically - and ensure a happier, healthier future for you and those you love.

Sign up for all the latest news from Physicians Committee for Responsible Medicine at:  http://www.pcrm.org/

Dr. Barnard was an engaging, personable speaker - willing to discuss issues with attendees during his book signing prior to and following his talk.  Cleveland was very appreciative of his appearance. Thank you, to our very own Rebecca Dingle of PCRM for her wonderful recipe demonstration.  Check the Healthy and Humane Observer for dates and locations of Rebecca's presentations.  You can also see here at the upcoming VegFest on June 1st.

I am the co-founder and editor in chief of this publication, and am very excited to be able to provide information to North East Ohio vegans, vegetarians, environmentalists, health advocates and animal rights advocates.