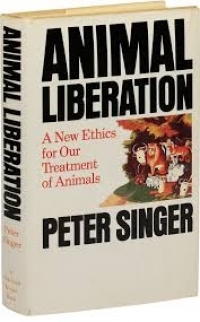 In Part I of my discussion on Peter Singer’s publication Animal Liberation (AL), I reported on the immense influence Singer’s work has had on the field of animal ethics, advocacy, and on the overall political and social framework of our time. Here I will discuss the elements of AL that led to its success, namely, the ethical arguments Singer formulates to show that the use of nonhuman animals by humans is morally unjustifiable.

The 18th century utilitarian philosopher Jeremy Bentham famously supported the ethical concern of nonhuman animals on the grounds that they, like humankind, can feel pain and pleasure. He remarked, “The question is not, Can they reason? Nor Can they talk. But, Can they Suffer?” Following from, and inspired by Bentham, Singer also focuses his animal ethics on the principles of utilitarianism and sentience.

Sentience is the defining variable for Bentham and Singer in that no “characteristic” can be found to exist in all humans that does not also exist (to differing degrees) in nonhuman animals. If one would grant humans the right to eat pigs, for example, on the grounds that pigs are not as intelligent, that person would also have to allow for the consumption of human babies and mentally deficient individuals. Of course most of us would never imagine participating in such acts of cannibalism. If one attempts to use, as an excuse for their subjugation of nonhuman species, the capacity of thinking morally, that person would have to explain how they, taking part in the slavery/killing of other species, are in some way more moral in their actions than animals that do not partake in such horrendous activities. Although Singer argues these points in the opening chapter of AL, he does so only to show the inconsistencies inherent in “characteristic based arguments”. The point of contention under review here (thinking) is nothing more than an “assertion of fact”. Ethics, Singer believes, is based on moral ideals, not “assertions of fact”. Equality and justice are issues of morality, intelligence and modes of thought are not.

To better convey Singer’s point here I ask you to imagine three individuals. The first is a teenage girl who is mute, the second is a child who is not very smart, and the third is a philosophy professor who graduated from a prestigious university at the top of his class. If we were to argue that higher levels of intelligence or speech were justifiable reasons for the suppression of another being we would have to say that it would be morally permissible for the professor to kill or enslave the teenage girl and the young child. Clearly this isn’t how we act in relation to other human beings; it appears, in all actuality, that those who lack these characteristics are actually granted more concern (or – if you prefer – compassion) by people who are lucky enough to have higher or more abilities than those without. If anything can be said for what I have been referring to as “characteristic based arguments”, it’s that those with higher capabilities are morally obligated to take care of those below them, not morally exempt as those who argue from characteristics would have us believe.

In addition to addressing the philosophical arguments from intelligence and speech, as represented in my example, Singer focuses on what he calls “speciesism”. People often argue that the distinguishing characteristic is simply that we, as human beings, are of a different species and for this reason alone we have no need to treat nonhumans as we would our own. This view is precisely what Singer is referring to when he uses the term “speciesism”. Synonymous with “racism” and “sexism”, “speciesism” is simply an attempt to justify immoral activity on the arbitrary ground of differing species. As skin color was used to justify the immoral actions of slaveholders, and as being of a different sex was used to argue that the suppression of women was morally acceptable, humankind continues using arbitrary distinctions in an attempt to justify immoral behavior. One who opposes racism and/or sexism on morally based grounds would have to also oppose the largest “ism” in practice today, speciesism. In failing to do so, an individual is guilty of what amounts to an unjustifiable moral inconsistency of character and behavior.

Singer’s arguments under discussion here, from “assertions of fact” and “speciesism”, are the foundations upon which AL is built. In many regards, these same arguments remain to be the foundation of the entire animal rights movement today. In part one of this article, I mentioned that efforts have been made on both sides of the animal rights debate to discredit Singer’s work in the field. Thinkers opposing the moral consideration of animals Singer set out to prove, stick to arguing from characteristics such as intelligence and speciesism, choosing to ignore the ethical inconsistencies Singer points out throughout AL. The more startling attempts to discredit Singer are undoubtedly those delivered by philosophers who consider themselves animal rights proponents.   Gary Francione, a self defined vegan “abolitionist” that argues against “animal welfare” reforms that seek to lessen the suffering of nonhuman animals, has, to some extent, built his career upon denouncing Singer’s views. Despite Francione’s continued efforts to separate his work from Singer’s, he too cannot help but rely on the arguments Singer offers in AL. Take the following excerpt from Francione’s contribution to the 2010 publication The Animal Rights Debate:

Speciesism is objectionable because, like racism, sexism, and heterosexism, it deprives beings with interests of equal consideration of their interests based on irrelevant criteria.

Francione, positioning himself in opposition to Singer and using Singer’s work, often, in attempts to distance himself from him, is certainly aware of Singer’s place in animal ethics and the literature surrounding the field. The term “speciesism”, the phrase “equal consideration of interests”, and the content that draws on the analogy of speciesism to racism, are all considered in the literature to be products of Singer’s early work in the field. Surprisingly, Francione fails to address Singer’s influence, offering no comment or citation linking his use of these ideas to Singer. Nonetheless, Singer’s influence on Francione is easily recognized by anyone familiar with Singer’s ethical writings.

Throughout the composition of this report on the influence of Singer’s AL, I have attempted to remain impartial, choosing to offer only an account of the contents of the book and the facts surrounding the history of AL’s role in animal ethics. In closing I find it appropriate to briefly remark on my reasons for writing this piece. As an animal rights advocate of many years, I have witnessed firsthand the growth of the movement within my community. While I am proud to have witnessed the increase of support for animal ethics and the causes related to it, I have grown increasingly disheartened at the extent to which many of the more recent members have confused, and/or misrepresented Singer’s views. I believe a great deal of this confusion stems from the more recent publications and the misrepresentation of Singer’s thoughts contained within these works. My reason for writing this piece was simply to clear up some of the confusion I’ve encountered in the last few years, and perhaps even encourage a few of my readers to give AL another look. I don’t expect anyone to agree with everything Singer says – I certainly don’t myself — but I do hope to encourage others to form their own interpretation of Singer’s ethics.

I’d like to thank Gia Campola for inviting me to submit to her publication. I’d also like to thank my good friend Paul Hanson for his editorial assistance on this article.