My Beef with Meat 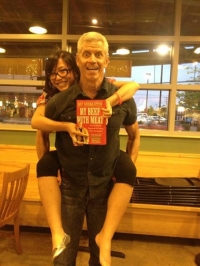 Plant strong and riding high with Rip and C.c.!

For the millions who are following a plant-based diet, as well as those meat-eaters who are considering it, MY BEEF WITH MEAT is the definitive guide to convincing all that it's truly the best way to eat! New York Times Bestelling author of The Engine 2 Diet and nutrition lecturer Rip Esselstyn, is back and ready to arm readers with the knowledge they need to win any argument with those who doubt the health benefits of a plant-based diet.

Esselstyn reveals information on the foods that most people believe are healthy, yet that scientific research shows are not. Some foods, in fact, he deems so destructive they deserve a warning label. Want to prevent heart attacks, stroke, cancer and Alzheimer's? Then learn the facts and gain the knowledge to convince those skeptics that they are misinformed about plant-base diets, for instance:

MY BEEF WITH MEAT proves the Engine 2 way of eating can optimize health and ultimately save lives and includes more than 145 delicious recipes to help readers reach that goal.

“My Beef with Meat is one of the most enlightening and practical books you'll ever read. Rip Esselstyn tackles every key health issue and provides exactly the information readers need to achieve the best of health and peak performance. As one of the most respected leaders in the movement for better health, Rip Esselstyn tells it exactly as it is.”

“My Beef with Meat" makes it clear why a plant-based diet is the best diet on earth, and why an animal-based diet is so unhealthy. This fascinating and fun book is a must for anyone interested in health and nutrition!”

The feature film Forks Over Knives, http://www.forksoverknives.com/ examines the profound claim that most, if not all, of the degenerative diseases that afflict us can be controlled, or even reversed, by rejecting animal-based and processed foods.

The major storyline in the film traces the personal journeys of a pair of pioneering yet under-appreciated researchers, Dr. T. Colin Campbell and Dr. Caldwell Esselstyn, Rip's father.

Dr. Campbell, a nutritional scientist at Cornell University, was concerned in the late 1960’s with producing “high quality” animal protein to bring to the poor and malnourished areas of the third world. While in the Philippines, he made a life-changing discovery: the country’s wealthier children, who were consuming relatively high amounts of animal-based foods, were much more likely to get liver cancer. Dr. Esselstyn, a top surgeon and head of the Breast Cancer Task Force at the world-renowned Cleveland Clinic, found that many of the diseases he routinely treated were virtually unknown in parts of the world where animal-based foods were rarely consumed.

These discoveries inspired Campbell and Esselstyn, who didn’t know each other yet, to conduct several groundbreaking studies. One of them took place in China and is still among the most comprehensive health-related investigations ever undertaken. Their research led them to a startling conclusion: degenerative diseases like heart disease, type 2 diabetes, and even several forms of cancer, could almost always be prevented—and in many cases reversed—by adopting a whole-foods, plant-based diet. Despite the profound implications of their findings, their work has remained relatively unknown to the public.

The filmmakers travel with Drs. Campbell and Esselstyn on their separate but similar paths, from their childhood farms where they both produced “nature’s perfect food”; to China and Cleveland, where they explored ideas that challenged the established thinking and shook their own core beliefs.

The idea of food as medicine is put to the test. Throughout the film, cameras follow “reality patients” who have chronic conditions from heart disease to diabetes. Doctors teach these patients how to adopt a whole-foods plant-based diet as the primary approach to treat their ailments—while the challenges and triumphs of their journeys are revealed.

Dr. Esselystn's son, Rip, now a retired fire fighter, in 2005, convinced his entire firehouse to eat a plant based diet. This experiment resulted in the best selling book, The Engine 2 Diet.  And, thus, "plant strong" was born!

Whole Foods on Cedar Road hosted Rip, Cleveland native, and sister Jane, current resident, for a discussion, cooking demonstration, and book signing.  A very large and attentive number of attendees were on hand to hear Rip's talk and taste Jane's delicious recipes. Local animal rights advocates have asked that the Healthy and Humane Observer thank Rip for including Chapter 33 in his newest book, and addressing it in his talk.  We, gladly, do!

I am the co-founder and editor in chief of this publication, and am very excited to be able to provide information to North East Ohio vegans, vegetarians, environmentalists, health advocates and animal rights advocates.